Up, up and away! [The Up balloon project] 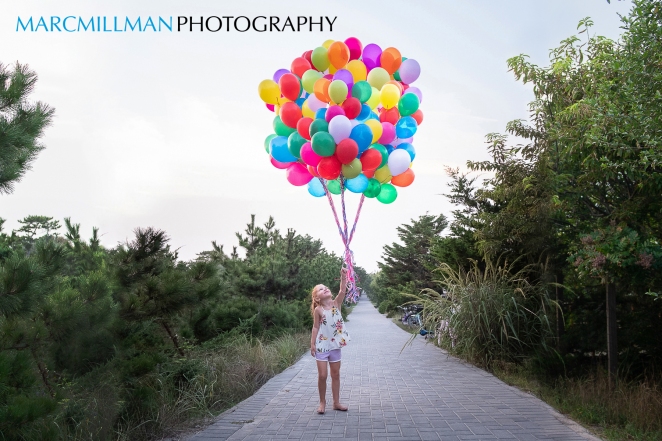 Sometime late in the Spring, I was talking with my daughter, Julia Summer about Disney films. I mentioned the Pixar film Up knowing that she had never seen it. I consider it one of their finest films. But I think the beginning with Carl’s wife dying is a bit heavy for little kids. (I know it made me cry at 41!). I explained to her how Carl ends up on an adventure with Russell when he ties a lot of balloons to the roof of his house. And just like that, another one of my crazy ideas was conceived: The Up Ballon Project.

With summer fast approaching, I jumped on Amazon and ordered a disposable helium tank and 50 balloons. I shipped them out to the freight house in Seaview on Fire Island. My plan was to create at some point in the summer a series of photos of Julia and her friends getting carried away by a large bunch of balloons.

As is always the case, the summer mainly got away from me. Between Golden Hour family photo sessions and too many wonderful days and nights spent relaxing away from the craziness of New York City, the last week of August was upon us and I still hadn’t cracked the seal on my helium tank. Not to be deterred, I informed the parents of all of Julia’s friends that Monday, August 27th was our day! We would meet on our deck around 5pm for a famous Millman BBQ of hamburgers and hotdogs and then walk onto the beach to take the photos. Unfortunately, we had already lost several families to end of summer events. But we had ten kids and that was good enough for me.

My wife Robyn, Julia and our friend’s daughter Finley blew up all the balloons and tied the colorful ribbons onto them. [Editor’s note: if you think 50 balloons is a lot…it’s not! And by the time you blow them up, you’re lucky if 46 survive. But more on this later.] Also, if you think one of my famous BBQs has ever gone off on time you’re crazy! Anyone that knows me well, knows that socially I function on “Millman time.” I raced to get all the burgers and dogs done for the ten hungry kids in order to avoid any meltdowns (Yes, my child is usually a “leader” in this area). And then a very sweaty me rushed the group up to the beach before we lost the good end of day natural light. In fact, it was completely cloudy which makes for great even lighting. But this also meant my window of opportunity was growing smaller even quicker! And then we got to the beach…and found that, as was the case for most of the summer of 2018, the wind was blowing strong out of the South. This means that if you stand with the Atlantic Ocean behind you, all long hair, clothing…and balloons are forced forward into the camera making people look like Cousin Itt from the Addams Family

I pulled an audible. The kids were running around on the beach, chasing each other, jumping off the lifeguard stand or attempting to get their feet wet before any adults yelled at them. It was all falling apart and this was my last free night of the summer! I gathered everyone. And back we went, up the steps to the other side of the dune and our street. The top of our street happens to be one of the higher points on the island. This afforded us a little buffer from the wind. What I lost was the blank horizon that I envisioned for my background as well as the “sand between the toes” feel I wanted. Yes, the wind was still pushing the balloons a bit. And ultimately, 40-some-odd balloons is not quite the correct number for what I wanted to do. But I considered this to be the first part of my great experiment in paying tribute to a favorite film. And like the magic of Walt Disney and Pixar’s digital universe, I was able to have my retoucher multiply the balloons to make things look a bit better. You can tell me what you think. 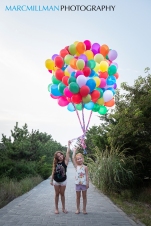 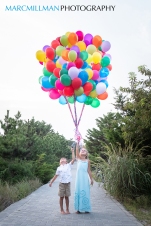 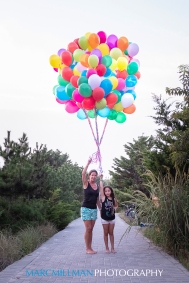 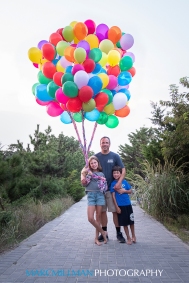 One final note: Like many of our friends who live out on Fire Island and spend day after day on our beautiful beach, we are constantly cleaning up trash brought ashore by the tides. And all summer long, I am jumping into the ocean to swim out and bring ashore balloons that are floating around before ending up in the stomachs of one our sea-living neighbors such as a turtle or dolphin. The balloons are especially awful in late June around the time of school graduations. For this project, I created a loop at the end of the ribbons for the kids to put their hands through. And I instructed them all to hold on tight and not let go. (I was not foolish enough to think this would be enough.) I tied about twenty feet of yarn to the end of the loop. And then ran that back to our deck where one of the adults held onto it even though we tied it to the deck railing. [This too was digitally removed by my retouch artist.] And yet… the very first kids to go let go! The balloons got tangled in the trees. Luckily we got them out. (This was all one more reason why I wanted to do this on the beach.) My main reason for writing this is to inform you that there are great organizations fighting hard to clean up ocean debris. You should look into them. A few of my favorites are 4Ocean, Surfrider Foundation, Ocean Conservancy and The Nature Conservancy. There are clearly a lot of charities to give money to. But if you enjoy clean water, time at the beach with your family and have a few extra dollars to give, please make a donation to one of these or any other group that’s fighting to clean up the awful mess we’ve made of our planet. And next time you buy helium balloons, please consider disposing of them by popping them and throwing them into the garbage.

Happy Thanksgiving to all! Gooble Gobble.

And if you’re thinking about family portraits, please feel free to get in touch. We can leave the balloons at home…or we can order two or three helium tanks and have an adventure of our own like Carl, Russell and Dug!!!

2 thoughts on “Up, up and away! [The Up balloon project]”

Another iPhone snap from @fugees25 last night at @pier17ny for @glblctzn
Ready or not, that was a fun time with @thefugeesofficial on @pier17ny “One time…”
#happybirthday @joanjett Wishing the OG woman of hard-rocking Rock & Roll a great day!
65 seems like a big party to me! Wishing my Uncle Douggie a very #happybirthday Here he is with band and label mates from throughout his funky and unique career. This was @livingcolourofficial celebrating the 25th anniversary of Vivid at @irvingplaza with special guests @mellemelglover and @official_sugarhillgang as well has #sugarhillrecords drummer #keithleblank Happy #65thbirthday @dougwimbish
Six for sixty. @kofimusic22 we miss you every day. Here are some images over the years of you hanging out and jamming with #family and #friends After all, I think this is how we all choose to remember you: your wonderful playing and incredible smile #ripkofiburbridge
Killer opening set for the Crowes on Saturday from my man @the_john_notto and @dirtyhoneyband at @pncartscenter
My Tweets